The Good Woven with the Difficult 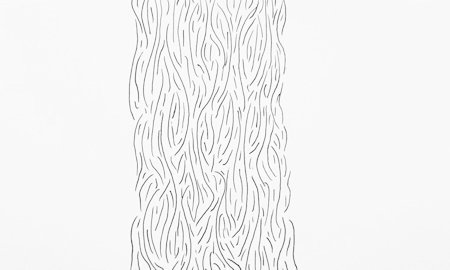 I let my red ten-speed bike drop when I came to the little garden tucked behind the church just a mile from the mall and my high school, a few miles from where I lived. I let it drop then laid down on the marble bench, stretching out in the shade. It was the kind of garden that most churches tucked near the rise of the large cathedral. In this one, the grass was cut short, the marble bench clean and the statue of Mary held in her half-shell of concrete.

It was hot that fall day, I had been riding my bike for hours – sweat saturated my clothes and trickled down the insides of my legs and arm. The marble cool against my heat. Mary, in her blue robes, looked down at me.

I had been riding and riding, mile after mile, because I was scared. My brother was in hospital and they did not know what was wrong with him. They did not know why a sudden mass, hard as a rock, had grown on the side of his neck. They did not know and were calling specialists from all over the country. Words like “cancer” and “inoperable” and “rare” thrown around.

I knew nothing about those words or what the doctors were doing because none of those words were being said to me or my other brothers. [It was the way of the family – do not say anything to the children.] He was just in hospital and I was not allowed to see him. It was bad.

I was scared, so scared. My brothers the only stable anchor when I was a kid, especially a teenager, in the family, in that suburb, in my small world [though we were far from stable ourselves]. I was doing the only thing I knew to do, which was ride my bike until I was too exhausted to do anything else.

I finally cried there, in that little garden, on that little bench. Cried in my terror. Crying, I opened my eyes and looked at the looming statue of Mary, her hands open to me.

Writing about the catholic church has been a tender process for me, which has been surprising. When I made the decision to officially leave the church at the age of 24, I was young and swept into a new-found rage about the reality of gender/race/economic inequality that I discovered after school.

I grew up in a white suburb in a white family and so was taught about history from that viewpoint. I do not remember talking about civil rights, about women’s rights, about systemic racism. I remember being presented a narrative of history where all the bad things had happened in the past and everything was sorted out now. It was only in college that this narrative began to break, but only a little.

I graduated as an English major from a school where most of the works we studied were written by white, heterosexual men. The dead white man syndrome that afflicts academia and “the canon” still [even though this is changing somewhat now].

When I left school, and found more diverse voices, I spent many years singularly devoted to seeking out women’s voices in literature – women, women of color, women of the LGBTQ community.

In my hometown, clinics that provided healthcare to women, including abortions, were being bombed. My roommate and best friend worked at such a clinic and had to walk through screaming protesters every day going into and coming out of work. We had to check outside our house, some days, to make sure she had not been followed.

I was angry. I was angry, especially, at the place where I had learned about god and devotion, seeing how who I was as a person – a woman exploring her sexuality and still scared to be in the world – was tagged as bad, less, the reason for sin and that being curious about sexuality was damnable. Literally.

I was angry when I started to really listen to the doctrine of the church. I was angry and I left angry.

But I was so angry because I also loved being catholic.

I mean, really loved it [before I understood the full workings of the church]. I loved it so much, I even considered becoming a nun when I was 17.

What I loved about the church was it unabashedness. It was a place of “god”, a place to speak about god and his [I use his because this is still the church doctrine, that “god” is a man] intention for us, for me.

Unabashed. Centuries of song and ritual, centuries of prayer and teachings about how to pray. And the stories of this one amazing person and the few people he gathered around him.

I felt something in me when I was at church, in the stories and iconography, around spirituality – a connection to something more than me. When I walked into my church, I suddenly had permission to feel what I felt.

I had permission, too, to be in my longing to know who I was and who I was with “god.”

A longing to know “god’s intention” for me, as the church phrased it.

It was a place, that church and those good priests whose sermons I listened to so intently, where I could dare to imagine that I did have a purpose, that there was intention for someone even like me. A lost girl in the very white, misogynistic, racist, lost suburbs of a Midwest city. A lost girl who struggled to believe she could have her own life.

At church, I was met by possibility. Priests who were sweet and funny and told great stories. Masses that were sometimes old and formal [in Latin!] and sometimes tried to be young and “hip”. Art and architecture that soared me.

I wanted to know if there was an intention for someone like me [because I did not believe there could be] and the church told me there was. The church even carefully mapped a way to live that intention. I felt I was part of something – all that history. All the people who came before me.

A place that spoke of love, unconditional. That sang of devotion. A place that even acknowledged the possibility of malevolence we all carry. I had seen all of it all around me – the love and the hate, the tenderness and the violence. And feared for all that I carried inside of me, too.

Next: What Happened on the Bench